If you are heading towards Bansko, you will not regret it. The region of Bansko is world famous for its breathtaking sceneries and unique historical and ethnographic sights of national importance.

Todorin peak, also known as Todorka or Big Todorin peak, is a large granite peak in North Pirin Mountain. It is the highest peak on the Todorino side ridge and is situated on the ridge of the same name. It has a rocky structure and is built entirely of granite. In some places you can see grassy areas.

As it is 2746 m high, it ranks among the 11 highest peaks in Pirin Mountain. There is a magnificent view from the peak revealing the nearby lakes called The Eyes of Todorka or Todorini eyes, as the name is associated with a legend. Todorka peak and Vasilishki chukar are separated by the Premkata saddle.

Todorka peak has very steep slopes, which are covered with rock blocks to the northeast. In shape it is a massive truncated pyramid with three high points, which mountaineers often call Big, Medium and Small Todorka. Big Todorka is the highest point of the peak, followed by Medium Todorka with 2708m and Small Todorka 2693m.

To the north is located the highest point of the peak. Its impressive pyramidal shape can be seen from Bansko. Several ski runs are built on its slopes. 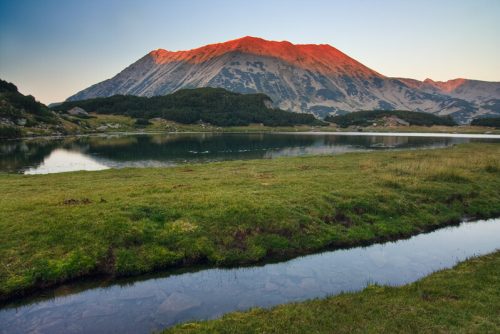 To the east are located the two Todorini Lakes (also known as Todorini eyes) in a cirque. Behind them passes the route from Vihren hut to Demyanitsa hut, which is well marked. To the west and to the south is located the Banderishka valley, whose shape follows the slopes of Todorin peak.

In some places of Todorka peak are built ski runs. Thanks to these, Bansko is one of the most famous resorts worldwide.

From Todorka peak you can enjoy a beautiful scenery to the peaks Vihren and Kutelo to the west, as well as to Ushitsite to the east. To the south you can see Kamenitsa peak, and to the north, if the weather is clear, we can see Bansko so well that we are able to distinguish the streets and buildings.

Todorka peak reveals its magnificent beauty if observed from Hvoinati peak and from Vihren peak, with a surface covered with wavy gullies due to avalanches. If observed from the south in direction of Banderiski chukar, the Todorka peak looks like a trapezoid in shape. The view from the north: the Razlog hollow, however, is the most magnificent. From there, the peak looks like sharpened pyramid, which is separated by a big valley from the Vihren peak.

If we look at Todorka peak from the Polezhanski Ridge, it will look like a long hill facing the west with its most exposed part. This long ridge has length of 1400m and exactly on it are located all three heights – Big, Medium and Small Todorka. They can be seen very well from the shores of Muratovo Lake and from Kaimakchal peak.

This place is preferred by fans of summer season who like climbing adventures. It is important to mention that the climbing of this terrain requires good physical training and motivation.

Between Karamski chal to the northeast and Todorka peak to the northwest is located a denudation surface. It is called ovcha polyana (sheep’s meadow) and is situated on the rising ground, which separates both cirques Karama and Vasilak. The name is due to the fact that large herds of sheep have been bred here in the past.

At the foot of Todorka peak is located the Shilingarnika area, which is a starting point of the lifts. It is situated along the route from the town of Bansko to Vihren hut. There is an Upper and Lower Shilingarnik. The name of the area comes from the fact that in the past lambs have spent the night here.

The name of Todorka peak, as well as the names of the nearby lakes, are associated with two legends. Viewed from above they really look like two eyes. According the first legend, the bold Bulgarian girl Todorka took part in the defense of the Sitan fortress.

To her last breath, the girl fought the Turkish invaders and chose to die before accepting the foreign faith. The legend has different interpretations, as in one version there is a man called Murat Bey, as Muratov peak is called after him.

While she was followed by the Turks, and because she didn’t want to be caught by them, Todorka climbed to the top of the fortress, then she jumped from it and died.

The second legend tells a story about a local girl called Todorka, who could not convince her father to give her to her beloved Vasil (or Vasiliki). Todorka left her father’s house and climbed the high hill. When she reached the top she started crying. Her teardrops formed the two lakes Todorini Lakes (also known as Todorini teardrops).

Her beloved Vasil was looking for her for a long time. So he reached Vasilashki chukar peak, and because he was so frustrated he jumped into the lake, which was above the peak (one of the Vasilishki Lakes).

In another version of the legend, Todorka is not a worrier, but plays the role of a beloved woman or the sister of the shepherd Vasil. He cried a lot because he was suffering because of her, so the Todorini Eyes Lakes were formed that way. Some legends tell that Murat bey, who gave the name of Muratov peak, had kidnapped Todorka and this brought the sorrow of the shepherd Vasil.

How to get there? 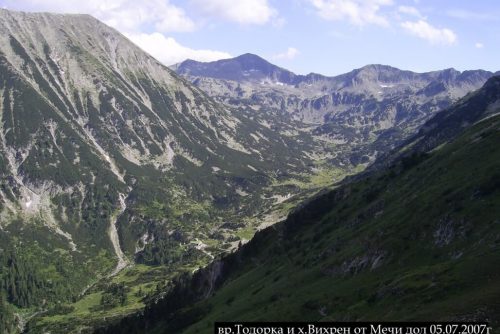 We can easily climb Todorka peak from Premkata saddle (also called Todorina gate) to the south of the peak. There the displacement to the top elevation is only 170 m, and also from the north, from the Shiligarnika. This is the only rocky place on the top. It is a narrow pinnacle, which connects the upper stations of the lifts with the peak. Another option is to follow the route from Vihren hut to Demyanitsa hut.

When we reach Vihren hut we are already closer to the mountain. Here we don’t need vehicles. If we start the climbing from Vihren hut, we will follow the route to the foot of Todorina gate, which overlaps with the route that leads to Todorka peak. The chosen path has a varied terrain, as it basically requires climbing, but there are some flat sections. From here you can enjoy a beautiful 360-degree panorama.

To get to Todorka peak we have to follow the path from Vihren hut. At the foot of the peak is located the path that will lead us to Demyanitsa hut. Although the path is flat at some places, with every step upwards we will feel that the path is becoming steeper.

On our way we will see several lakes. One of them has the curious name Zhabeskoto lake (the frog lake), and it is called this way because many frogs live in it. After we pass it, we can start the actual climbing to Todorka peak.

The route goes only upwards and is zigzag. The path is relatively easy to pass. After that we have to pass through Small and Medium Todorka. This will take us about an hour, because the path is filled with stony hills, so we have to be careful.

With every step we take, the scenery becomes more impressive. When the weather is clear, we can see one of the champions of Pirin Mountain – Vihren peak and Kutelo peak, and if we turn to the other side we can enjoy the peaks Kamenitsa, Polezhan and Strazhite. The other places we can see from there are Vihren hut and the two beautiful Todorini Lakes.

Reaching 2746 m above sea level will take us about 4 hours in one direction. Because we will spend a lot of time outdoors in nature, it is advisable to take food, water and warm and comfortable clothes.